By purchasing a TROBOLO® you are not only making a long-term decision for a more cost-effective alternative to the conventional toilet, but above all for an environmentally friendly toilet system that is a step ahead of competitor products in many respects in terms of sustainability. In the following, the specific functions of a TROBOLO®, which contribute to a positive environmental balance, as well as the basic principles of sustainability, which were the inspiration for the development of the TROBOLO® separation toilets, will be explained in more detail.

Thanks to the use of a special separator, our TROBOLO® separation toilets enable an effective and hygienic separation of solid and liquid excreta. Moreover, neither environmentally harmful toilet chemicals nor precious water are used in their disposal, which means that black water – i.e. flushing water mixed with urine and faeces – is completely avoided.

Diluted with water, urine can be used as a fertilizer for ornamental plant beds. Thanks to the practical inlays, the faeces, which have been dried by means of exhaust air or added litter, can be easily disposed of along with household waste or converted into humus in a composter.

A TROBOLO® thus functions completely self-sufficiently and consistently avoids the formation of black water due to its waterless function. But why is this so important?

Black water has to be treated together with other waste water (yellow and grey water) in various complex processes within a sewage plant. The purification processes are divided into physical, biological and chemical processes. With physical processes, solid floating and suspended solids are removed using mechanical equipment. In the second, biological treatment stage, degradable organic waste water components are mineralised by microbiological processes. Finally, chemical reactions such as oxidation and precipitation are used in the chemical treatment stage.

A report on wastewater disposal in Mecklenburg-Western Pomerania, which is intended to serve as an illustration here, shows that wastewater treatment companies have to spend an average of €4.74 per cubic metre of wastewater. Water consumption in litres per capita and day in Germany is between 112 and 142 litres, depending on the consumption profile. However, only 3 litres of this is used for drinking and cooking. The remaining 109 or 139 litres are used for cleaning and personal hygiene (grey water) and 40 litres for flushing the toilet alone.

This amount could be further subdivided into yellow water and black water, but since none of the above-mentioned waste water is produced thanks to the waterless operation of a TROBOLO®, it is already clear at this point that by deciding on a TROBOLO® separating toilet you can reduce your daily water consumption by a considerable amount and thus avoid the costly reprocessing of the black water portion. In the following, a further illustration will serve to show how a TROBOLO® can make concrete savings in daily water consumption.

Reduced water consumption thanks to TROBOLO®

According to water management estimates, water consumption in litres per capita and day is distributed roughly as follows:

It should be noted that the minimum value (112 l) is slightly below the average water consumption of 122 litres mentioned above, but the maximum value (142 l) exceeds it by a considerable amount. These deviations are a result of different consumption habits. If the above-mentioned water management estimates are based on the maximum value, this results in a daily water consumption of 142 litres. As can be seen from the following graph, 28 % is used for toilet flushing alone, which can be saved by using a TROBOLO®.

If the daily per capita water consumption is based on the minimum value of the above list, total water consumption is only 112 litres, but the percentage of water used for flushing the toilet increases to more than one third (36%) of the total consumption. This can be attributed to the fact that, according to statistics, reduced water consumption is particularly feasible in the area of showers and personal hygiene, but not in the amount of water needed to flush toilets.

The waterless functioning of a TROBOLO® Separating Toilet has been proven to effectively save between 28 – 36 % of daily water consumption. This means that you not only make a considerable contribution to the avoidance of black water and its costly recycling, but ultimately also to the sustainable use of water as a resource and thus to the preservation of our environment. In addition, these savings are of course also noticeable in your wallet, as you can read in the cost comparison of TROBOLO® separation toilets with other toilet systems.

Composting and closing the nutrient cycle

The exemplary environmental balance of a TROBOLO® is not only due to water savings just described and the resulting avoidance of black water, but also to a large extent to the possibility of composting toilet waste and returning it to nature once the decomposition process is complete. This recycling is particularly easy because of the separation of excrements. For this purpose a decentralized recycling in a composter directly on your own property is recommended. However, care should be taken to ensure that the toilet waste is properly composted. The use of a closed composter is of particular importance in order to prevent rainwater from penetrating the compost material and the resulting formation of black water in the composter.

In practice the composting of toilet waste from a TROBOLO® is very easy. Thanks to the litter used or the electrical exhaust air, the collected solid waste is dried to such an extent that it can be easily removed from the collection container together with its inlay and emptied into the composter, where it is decomposed along with other household waste from the garden and kitchen. If you have chosen compostable inlays, you can easily add them to the compost material. Finally, urine, diluted with water, can be used as organic fertiliser for your own ornamental plant beds in the garden.

Finally, during the composting process, the toilet, garden and kitchen waste mixed in the composter is turned into useful and ecologically valuable humus, which can be used as an excellent organic fertilizer. However, it usually takes one or two years until this transformation takes place, which is why a sufficiently large volume must be ensured when choosing a composter. The TROBOLO® composter made of robust solid wood, for example, has a capacity of 600l, which should be sufficient for comfortable and long-term composting.

Ultimately, composting of one’s own toilet waste enables closure of the nutrient cycle. Nutrient elements, for example, which are first taken up by plants via their roots and finally enter our metabolic system through food intake, are returned to the earth in the form of organic fertiliser. Thanks to the TROBOLO® separation system and the resulting possibility of composting one’s own toilet waste, if desired, the nutrients can be returned to their home. In this way, you not only make an important contribution to sustainability per se, but also have a direct influence on your individual ecological footprint, which is considered a measurable indicator of sustainability worldwide.

In order to ensure proper composting of one’s own toilet waste and thus closure of the nutrient cycle, the necessary framework conditions must first be guaranteed. As already mentioned, this includes a closed composter, which offers protection from rainwater, as well as a sufficiently large collection volume to allow the compost material to be stored for at least two years. In addition, however, there are further tips on composting which should be taken into consideration at this point:

Besides toilet waste, both collected garden and kitchen waste can be added. These include grass clippings, leaves, fruit and vegetable waste, coffee grounds, tea leaves, but also straw and old wood can be composted. However, printed paper and large quantities of fir needles and twigs, oak and walnut leaves, weed roots, cigarettes and ashes should not be composted.

The more varied the compost materials are, the more important it is to ensure that the components are mixed well, as the wood-containing materials are difficult to decompose and the fresh ones rot quickly in dense layers.

With sufficient humidity and air supply in the compost container, microorganisms, especially microbes and fungi, quickly begin their work. But larger organisms are also involved in the decomposition of the compost material and its conversion to humus. These include earthworms and among them the dung worms. The latter are available in specialist shops and can be added to the compost as a preventive measure.

So-called fresh compost is produced after only a few months. This is characterised by the fact that coarse components are still present. It is already suitable for mulching, but not yet for fertilising. Ripe compost needs at least one year of rest before it can be removed. It can be easily recognised by its typical forest soil smell, it is dark and crumbly and does not contain any coarse components.

The degree of maturity of the compost soil can be determined relatively easily with the so-called cress test. For this purpose, a small flower pot is filled with the compost soil to be tested and a second comparison pot is filled with standard potting soil. Now add cress seeds to both pots and leave them in a light place for a few days with sufficient watering. If the cress has grown quickly and vigorously in both pots, you can assume that the compost is ripe and use it for fertilization. However, if the seedlings in the compost pot do not develop a clear green colour and appear puny, the compost is not yet sufficiently mature and requires further resting time.

You will find detailed information about composting on our subpage Correct Composting. 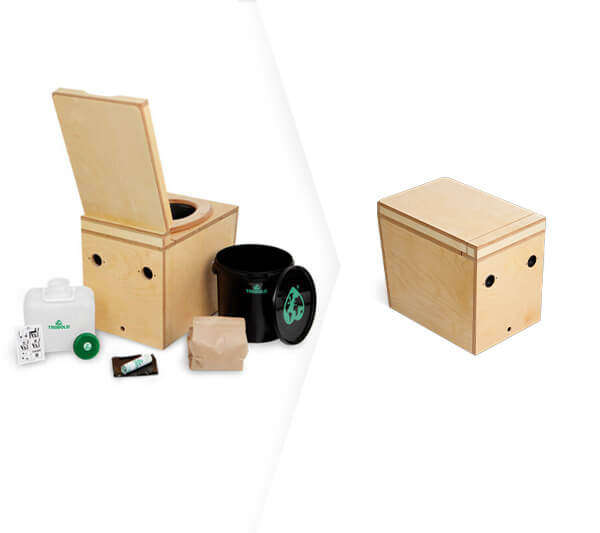 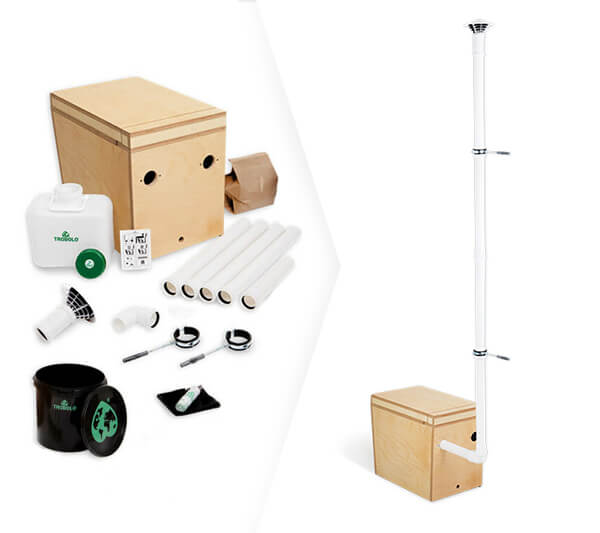 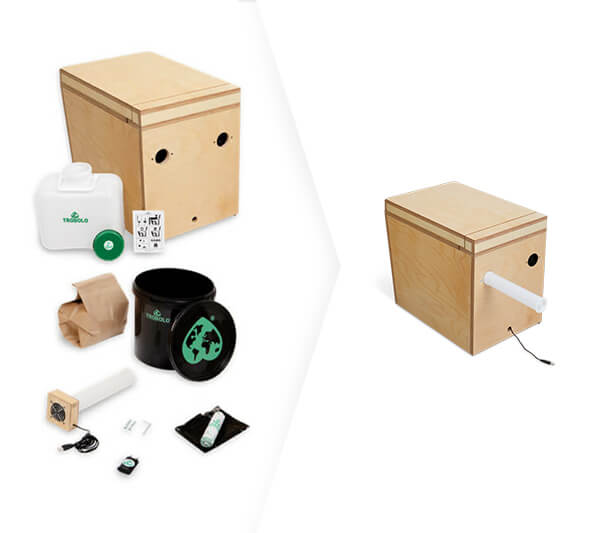 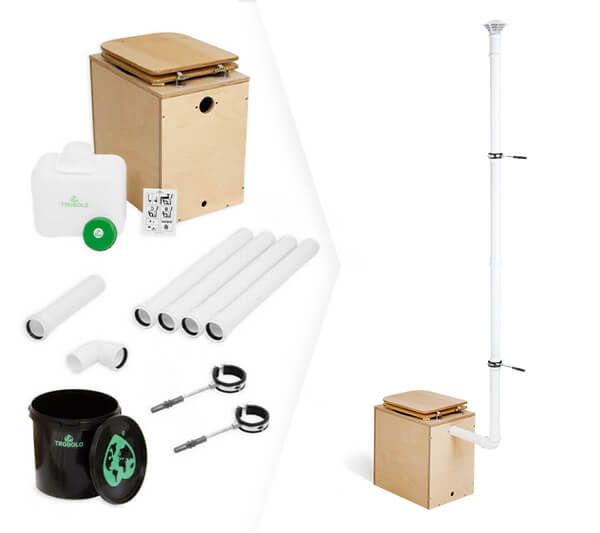 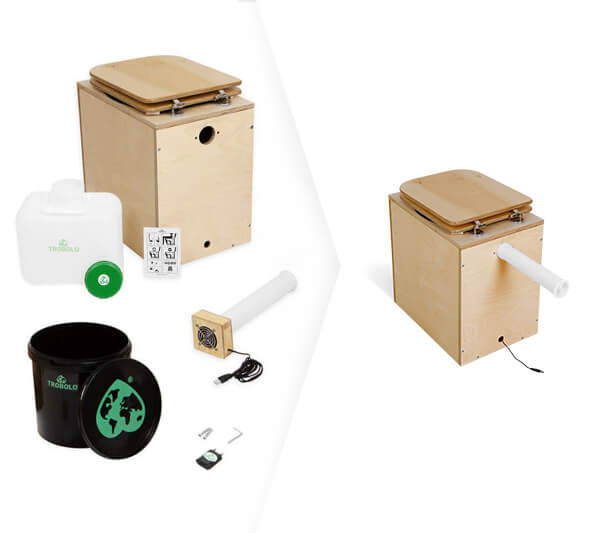 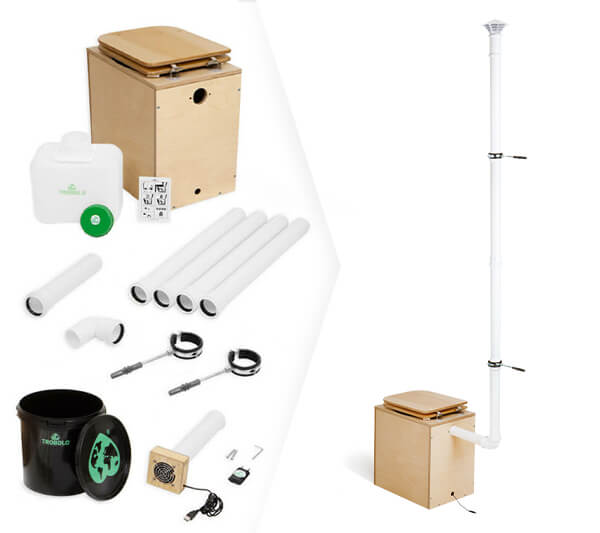